The people who find themselves as passengers in the ride-share car that Thomas John is driving are strangers to him- but that doesn’t keep him from knowing them better than they ever imagined. Once the unsuspecting riders are buckled in and have given him the address to their destination, they get the opportunity to learn more about themselves. This is the premise for John’s new show called ‘Seatbelt Psychic‘.

Thomas John is a psychic medium who can connect with spirits and foresee the future. John shot to fame when he made media appearances, in shows such as ‘Entertainment Tonight’ and ‘The Real Housewives of New York City’, and in magazines including US Weekly and the Wall Street Journal.

Working with famous celebrities like Stevie Nicks, Goldie Hawn, Jennifer Lopez and Courtney Cox has turned him into somewhat of a celebrity himself. The person behind the concept for this new show was less of a celebrity themselves, and more of a behind-the-scenes person he met about a year ago named Zeb Newman. Newman is a producer on “The Late, Late Show with James Corden”.

“Basically, it came about sort of a serendipity. We ended up talking about TV concepts and stuff and he asked me, ‘What would you think about doing a reading in a car?’ I said, ‘Oh my god, I don’t know. I’ve never done that before,” says John, describing the first conversation he and Newman had.

Newman got the idea from the recurring segment on ‘The Late, Late Show with James Corden’ called ‘Carpool Karaoke’. This segment has become widely popular and Newman knew the same concept could be applied to John and his talents. They pitched their idea to Lifetime and Lifetime agreed. From there, “Seatbelt Psychic” became a reality.

“I know nothing about the people who are getting into the car,” John says about the series, which is shot in Los Angeles California. “People get in believing they are getting in a ride share which is taking them to a destination. Then I tell them who I am and what I do, and we see if they’re open to that.” 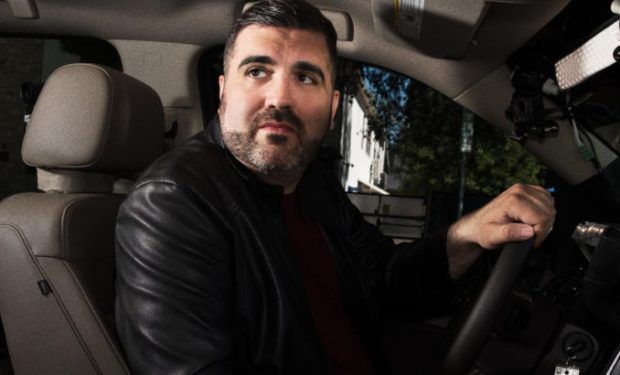 “We keep it as organic and natural as possible.” John adds. “Nobody wants to do a show that’s based on something that’s not really happening. And people have all sorts of reactions to it, just like in the real world.”

The psychic says that even though he is more accustomed to doing his readings surrounded by large crowds in theaters, there’s a certain charm to working in the intimate setting of a car.

“Part of the reason I was interested in doing the show was because I thought, “Well, this is a way that I can reach people who would never be seeking this out,” John said. “And that’s basically what’s happened.”

“And as far as the driving, it’s not all that distracting. It tends to relax me a bit, because I tend to get anxiety before a reading.”

John has had his gift for a long time, since he was a young child. He remembers realizing he was unique but not quite understanding how it all worked because he was so young.

“I was about four years old. I saw my grandfather, who was my father’s father. He had passed away but I was getting images from him that I shared with my parents.”

“At first it was sort of like whatever, I don’t think anybody thought about it a lot. ‘Oh, he’s got an imagination!’ I think as things started to come through, 7 or 8 years old, it became more specific. There were things I wouldn’t know.”

“That’s when I started to feel, ‘OK, everybody’s not seeing what I’m seeing.’ And I felt kind of weird,” says John.

He tried his hardest to push these thoughts and visions somewhere deep down inside of himself and ignored them as much as he possibly could. After graduating high school, he enrolled at the University of Chicago and completed his pre-med education in a matter of four years. He had a clear idea of what his career would look like but he found himself unhappy a lot of the time. He suffered with anxiety and depression.

“In order to combat that I started to meditate,” he says. “I realized I could control my thoughts through that, and that also helped me with my abilities.”

After discovering just how much of a psychic gift he was blessed with, John decided to start practicing by giving psychic readings to his family and friends at no cost. Even though he started doing these readings in a timid and reserved manner, he noticed that his skills were getting better and better, and his confidence grew. He began refining and sharpening his skills and studying the spiritual world. He had several talented mentors, including the famous Caroline Myss.

“I tell people if the spirit world wants you to do that, they’ll have you do that. They will make it happen,” John says.

If you’re curious about the new psychic show, you can catch “Seatbelt Psychic” on the Lifetime channel on Wednesdays at 10:00pm PDT.

The Benefits And Importance Of Getting Spiritual Advice From A Psychic

$7,000 To Be Split Amongst Hundreds Of Iowans In Fraudulent Psychic Settlement

Is There Such Thing As Christian Psychics?