Home » Blog » Psychic Brings Peace and Forgiveness To Daughter Of Actor Peter Sellers For Excluding Her From His £5.5 Million Will After His Death
In The News

A psychic medium helped comedian Peter Sellers’ daughter, Victoria, find forgiveness of him in her heart for being left out of his will after his death. The psychic was able to contact Peter and relay messages about how he is truly sorry about what happened.

The Goon Show and Pink Panther actor passed away in 1980 from a heart attack at the age of 54, and before his death he made a will where he specified for his fourth wife, Lynne Frederick, to be awarded with most of his £5.5 million dollar fortune. Peter and Lynne were going through a divorce at the time of his death, and Victoria was very open about how much she despised her. 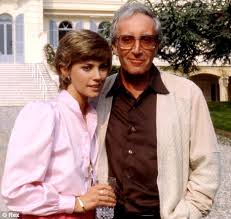 Peter Sellers with fourth wife Lynne Frederick, whom he left all of his money to.

Victoria was born to Peter and his second wife named Britt Ekland and was the only child he had with her. The only thing Victoria was left with in his will was £800 for herself and £10,000 for her education.

After Peter’s death, Lynne married a heart doctor in California named Barry Unger and had a daughter with him named Cassie Unger. Lynne died of an alcohol overdose in 1994 and all the money Peter left Lynne went to Cassie afterwards, including his £20 million estate.

For so many years, Victoria could not understand why he would do that to her and had resentment towards him. At 49-years-old she decided to consult with a psychic to see if she could get some answers to her questions.

“What happened was so profound I couldn’t ignore it,” says Victoria of the experience.

“The guy didn’t know who I was. I went there with a folder, which I kept closed, which had a picture of me, Dad, and my Swedish grandma and a couple of letters from my father written on his favorite Gucci notepaper.”

“The medium said my father wanted to apologize. He said Dad was proud of me for surviving what I’d been through and that none of it had been meant to happen, that he was sorry.”

“People might think I’m nuts but it was what I needed to hear. After all these years it was time to let go of the anger. I sobbed my heart out.”

“I went home and took out photographs of him that I’d kept hidden away for years. I looked up and said, ‘It’s OK Dad, we’re good.’”

Currently, Victoria works at a restaurant to pay the bills and is living in a rented room in West Hollywood.

She suffered with a drug and alcohol addiction for a majority of her life but has now been clean and sober for three years.

Victoria was not the only child that Peter had, he also had two children from his first marriage to an actress named Anna Howe, a daughter named Sarah and a son named Michael.

Michael passed away in 2006 at the age of 52 and Sarah lives and works in London, running a stuffed animal shop and choosing to stay clear of the spotlight associated with her father.

“They missed out on the legacy, too. Dad’s will didn’t just hurt me it hurt the whole family. We never contested it because under British law, you can only contest a will if you are left nothing. We were left a paltry amount,” says Victoria.

She is in the process of coming to speaking terms with Cassie Unger because Cassie is in charge of the Sellers millions, as well as all rights to Peter Sellers’ name.

“Cassie can keep all Dad’s millions. All I want is the right to use my father’s name. It belongs to us, his family. And there are home movies of me and Dad that I’ve never seen. I’ve given up on wanting any money. But I’d love to see those movies,” she says.

Introduction To The 7 Chakras

Scamming Psychic Arrested After Tricking Elderly Woman Out Of $7,000