Atlanta, GA- RN and BSN-OCN Gail Trauco is a true angel in the eyes of many whom she has come in contact with through her line of work. She however, states that she simply has angels on her shoulder, which led her to become an oncology certified nurse. In her career, she has met many cancer victims that had no cure and were just staying in cancer wards living out the last of their days. She has a natural psychic ability that has helped a lot of these patients in a major way. The combination of her natural ability and her medical training have opened the door for her to join the medical world with the world of mind-body-spirit healing, this in turn caused her to be one of the most sought-after grief mediators and psychic mediums in the country.

Trauco discovered her psychic abilities when she was just a child in Foggy Bottom, NC on the farm where her grandparents raised her. The first spirit that she ever saw was that of her great-grandfather, and she claims “I almost dropped my slop bucket the first time I encountered my great-grandpa, because I recognized him from photos and knew that he was dead.” She would encounter Cornelius “Pa” Hagwood, her great-grandfather, in the mornings before school, while she was feeding the family livestock. She states that “Pa” would wait at the hog pen for her every morning and would walk her all the way across their property from the cornfields to the stables. She says that he also taught her how to pull fodder from the cornstalks and take care of the animals. Aside from “Pa”, Trauco would also encounter a jolly little spirit named Bonnie Blue Hagwood at the community Baptist church cemetery. Bonnie was a little girl that passed away when she was just four years old, and she and Trauco would run and play together.

Her great-grandfather also taught Trauco to always trust her gut and this word of advise coupled with her “God-given psychic abilities” helped guide her life out of poverty. It also helped her survive her years as a young girl, since she was always getting bullied and abused by other children. She was ridiculed and considered an outcast because she had to wear dresses made of feed sacks, being overweight, and having special psychic abilities that no one else had or could understand.

It was Trauco’s sympathy and love for her fellow humans- even the ones no longer living- that motivated her to volunteer at the emergency room of Wake Medical Center as a candy striper in her teenage years. Out of high school she got accepted into the nursing program at the University of North Carolina Chapel Hill. After completing the program, she was employed by Duke University Cancer Center located in Durham, NC. She worked under Dr. Hilliard Siegler who was the Chief of Surgical Oncology. Trauco realized that her extraordinary natural ability to heal could be used to give solace to cancer patients and their families. Her amazing gift accompanied her from operating to recovery rooms, allowing her to care for the patients in a whole new and phenomenal way.

Trauco’s amazing work at the famed Duke Cancer Center led her to an even better job with Glaxo Inc, which is a pharmaceutical and healthcare company that is research based. They also develop disease-fighting medications. She was hired on to be a Clinical Research Associate, and she was able to move up in the company rather quickly. Unfortunately, at the same time that she was moving up in her profession, her weight was moving up just as quickly. When she left Glaxo Inc in 1992 to work for Dow Corning she weighed about 220lbs, with a height of about 5’5”, and by the time she left Down Corning in 1996, she weighed over 300lbs.

Trauco then moved from North Carolina to Atlanta, GA in May of 1998 and made the important decision to start working for herself. She started her own contract research organization company called Peachtree Clinical Research. This was a full service facility that organized and managed clinical trials for biotech, device, and pharmaceutical companies. By the end of 2001 her company was making about $1 million a year pre tax, had about twenty independent contractors, and had five full time employees. Around this time in her life however, her weight went up to about 350lbs; she had gained 50lbs in a matter of two years. She was giving all her time and energy to helping and taking care of others, that she had lost focus of taking care of her own health needs. She bought and renovated a farm in Fayetteville, GA and this kept her busy, taking up most of her time. The farm housed her new office and also served as a place to keep her horses. Aside from the new office she took care of, she was always watching over and taking care of her secretaries, project managers, regulatory assistants, and her oldest son who went to work with her. Due to him having gastroparesis, he has to have a feeding tube on him at all times so Trauco would take extra care of him. She used the remainder of her free time to use her psychic abilities to channel Spirits for her clients. She would use these Spirits to answer their personal questions and to help them with unresolved spiritual issues; she did this solely out of compassion, never requesting payment of any type.

The President of ERG Clinical Consulting, Inc, Edward R Gehrke, knows first hand the comfort that Trauco’s amazing ability provides. Gehrke’s wife passed away from breast cancer, leaving behind Gehrke and two sons. A few years later, the younger of the two, Steven, committed suicide; he was very close to his mother and her death deeply affected him. This was a very hard time in Gehrke’s life, but Trauco was able to bring him peace and solace. “Through Gail Trauco’s unique gift we now know that Steven is safe and happy on the other side,” says Gehrke. He doesn’t doubt even for a second that Trauco made contact with Steven, due to the fact that she was able to provide information to Gehrke that only Steven would have known, as well as identifying items that had a special connection to him. It was due to Trauco’s unique ability to relay messages from Steven to Gehrke that he was able to accept that the fact that the death of his son was a personal choice and that nobody was to blame. This knowledge comforted him and helped heal the pain he was suffering from. “People who seek help during the grieving process are able to cope,” he says. “Those who internalize their feelings suffer health wise.”

Sadly, while Trauco was busy providing comfort from personal problems to those around her, her business and health began to suffer. In 2001, two biotech companies defaulted on their contracts, which was a major hit to her company. She had no choice but to lay off all of her employees, and due to the fact that her business collapse was being highly publicized, she lost pretty much everything she owned. She lost four houses, her car, and even her husband in an ugly divorce. “Nothing was left except my kids, dogs, and horses,” she said. This extra stress caused even more weight gain and she was weighing in at about 400lbs by this time. She states that in her head, all she could see was a headline that read “Fat White Trash CEO… Walked Over by Corporate America.”

“At the time of my maximum weight, everything in life was crumbling around me. I was a size 28; I couldn’t bend over to tie my shoes; I had to sit at the end of the table. Hospital operating rooms couldn’t find scrubs to fit me,” she recalls. That all changed one day when one of her angels named “Spirit” tapped her on the shoulder.

Spirit guided Trauco to Louisville, KY, where she was the first person in the Southeastern part of the country to have the lap band placement surgery, which was highly controversial at the time. The procedure had just been approved in June 2001 and she had it done five months later, in November 2001. This procedure was made possible for Trauco due to the fact that she consented to having the surgery taped. Norton Hospital wanted to tape the surgery so that they could use the footage to promote this new procedure. 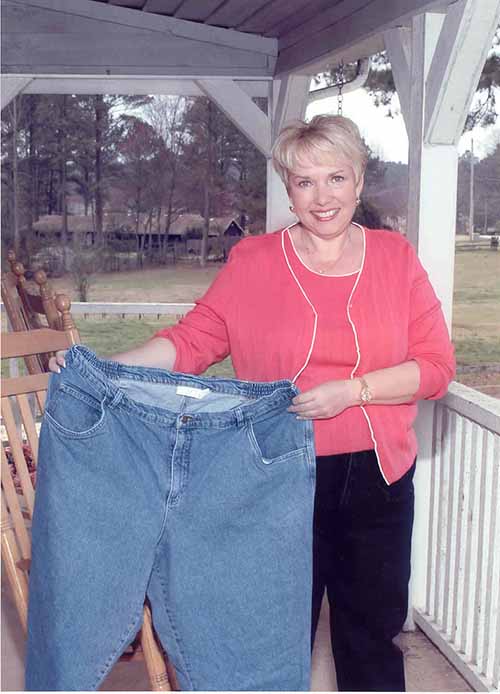 Spirit made her realize that caring for her self and her health needed to be her primary concern, especially after having spent years and years caring and comforting patients and clients. “Spirit has a way of guiding you down a different path,” she said. Trauco would use the strength that her spiritual angels gave her, and she would pray nonstop. It was because of this that she decided to start adding some exercise into her life. She began moderately exercising by walking her horses, and when she was able to bring her weight down to about 250lbs, she decided to start riding the horses. During the following 2 years, she managed to lose about 100lbs. She lost a total of 240lbs over a 7 to 8 year period.

She says of the experience; “Following Spirit down the road to personal weight loss and healing has taken me in a different direction—one to help others heal. Weight loss has heightened my awareness of cellular health and physiology, which is essential to being an accurate medium.”

“In today’s stressful times, people consult psychics if their lives are troubled and they cannot navigate a path to the future because they are locked into pain of the past. I am not one of those soothsayers who gazes into a crystal ball. I help clients see the light at the end of the tunnel,” says Trauco. Due to the high demand for her gift, she began offering various services, such as Hypnotherapy and Spirit Trac; these services help her clients reach their weight loss goals, assists them in healing anxiety and depression, and allows them to overcome traumatic life events.

For a similar story, read my article Hospital Nurse Kept Seeing Spirits On Ward So Decided To Quit And Answer Her Calling As A Psychic Medium.

As ‘Long Island Medium’ Theresa Caputo’s Scandal Grows, Psychics Give Their Opinions About Her On Radio Show

8 Great Ways To Revitalize Your Relationship

These High Powered Execs Say Psychics Are Making Them Rich