San Francisco, CA- Simon Cowell is being proactive about his new his Los Angeles house. Although he hasn’t experienced any activity that could be suspicious, he believes in the “better safe than sorry” mentality. For this reason, he has hired a psychic to perform an exorcism in it. He is hoping that this way, he is keeping negative energy from entering his home.


“I wasn’t trying to get rid of bad things but I believe your home should be peaceful,” he said in regards to his decision. He owns houses in England and Spain, and we can only assume that these other houses have undergone similar treatment.

He was apparently pleased with the psychic’s work because he was quoted as saying “I have to say the house healer did a great job. I did it because if you believe something can make you happier, then try it.” We are glad that he isn’t letting the old “what will people think?” mentality keep him from doing what he feels is necessary for him to do! 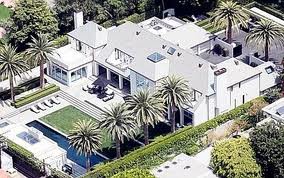 It seems that he felt having the psychic do this to his home was a good idea, and a success since he said “two people came around today and said the house felt different. So you never know.” We are happy that he is pleased with his decision.


“Today I had someone heal my house. Strange but great. The healer brings in good energy. Someone told me about it. It takes a couple of days,” he wrote online for his fans.

Things such as herbs, crystals, and pendulums are used and waved around by the healers while they move around the house from room to room, in order to to expel any negative energy that may be present anywhere in the house.

In a process known as “dowsing”, healers also shield the inhabitants of homes (or anywhere else where they have been called) from depression and insomnia, which is another major reason why people seek healers for their homes. Cowell defends his decision to shell out money to a psychic for this reason by advising the critics that he has had a successful week “business wise” and that he is also expecting his new TV franchise to take off making it even better.

As of yet, he has not released any details about what TV franchise he is referring to.

Read my article about how homeowners are using psychic services to sell their homes.

Is Your Psychic Reader Legitimate?

legitimate psychic, psychic readerPsychic Scams And How To Avoid Them

Karl Lang, “Pervert Psychic”, convicted on all 12 counts, sentenced to 2 years in prison

What Is Lucid Dreaming?

The 7 Most Common Healing Crystals And How To Use Them