Tempe, AZ- A Tempe area psychic named Melinda Vail has extended her services to help in the search for Jack Culolias, a 19-year-old college student who has gone missing. Culolias’ family is desperate to have him home for the holidays.

Culolias was last seen being escorted out of the Cadillac Ranch bar at Tempe Marketplace by bouncers on November 30th. Culolias is a student at Arizona State University and he was at the bar for a fraternity event.

Vail told ABC News that she heard about Culolias’ case and wanted to help, so she volunteered her services.

Out of respect for Culolias’ family, Vail has declined to make a public statement about whether she believes Culolias is still alive or not. However, she was able to give the Tempe police detailed information that they can use in their search.

Vail said, “I’m getting names of people both living and dead. They are pieces to a puzzle.”

So far, the search for Culolias has been very frustrating and anguishing for his friends and family.

Alec Pinto is a friend of Culolias and was with him at the Cadillac Ranch bar on the night of his disappearance. They were both joining the fraternity Sigma Alpha Epsilon and were at the bar to socialize with the rest of the fraternity members. They were just there to hang out and have fun before facing the next weeks’ initiation into the fraternity.

“It had nothing to do with hazing at all, it was purely for fun,” said Pinto.

Pinto states that Culolias got very intoxicated and urinated off of a balcony. This caused him to be escorted out of the bar by the bouncers, that was the last time anyone saw him. 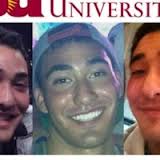 The next day, after not having heard from Culolias following that event, Pinto became increasingly concerned about him. He and Culolias would normally either see or talk to each other on a daily basis.

“I was worried that no one had seen him and that he hadn’t contacted me,” said Pinto.

The next day, after still not knowing Culolias’ whereabouts, Pinto became afraid for his well being and called Culolias’ family in Orange County, California. He got a hold of Grace Culolias, his mother, and advised her to file a missing person’s report on him.

His mother did file the report with the Arizona State University Police but quickly discovered that they may not be of much help due to the fact that they were short staffed. Not being able to sit back and wait, she decided to drive down to Arizona and attempt to locate Culolias herself.

“I felt like I was the one in charge of the investigation,” she said.

The Monday following his disappearance, she decided to go down to an area described as “desolate” by Tempe police, a river basin near the bar, to see if she could find any clues. She did find something- a single red Vans sneaker that she knew for a fact was his.

Upon discovering his shoe, she called the Tempe Police Department. They had taken over the investigation by this time.

When Grace Culolias told the Arizona State University police department of her discovery, they advised her that they had already searched that area the night before with flashlights. Culolias was not satisfied with their actions during the first critical hours of her having notified them of her son’s disappearance.

“They did not do a good job. If they would have, they would have found the shoe on the second day instead of the fourth. They should have immediately turned it [the investigation] over,” she said.

ABC News attempted to reach the Arizona State University Police Department via phone calls and emails to get comment from them but they never responded.

When the Tempe Police Department took over the investigation, they utilized a helicopter, K-9 unit, and specialty equipment for searching underwater in their attempt to locate Culolias. Though they have not found anything, they state that they do not have reason to believe that there was any foul play involved.

His mother mentioned that Jack had confided in her about being worried and nervous about the upcoming fraternity initiation week- “hell week” as she calls it.

“There is no sign of foul play. I’m hoping he may have hid because he didn’t want to go through hell week. It may have had something to do with the fraternity but, at this point, I don’t see any physical evidence,” she said.

The Sigma Alpha Epsilon fraternity has a very stringent policy against hazing and against excessive drunkenness, says Pinto. SAE started a fund to raise money for the expenses that Jack’s family is enduring in order to stay in Arizona and search for Jack. They have already raised $2,712 in only two days.

Grace Culolias talked about her undying resolve to locate her missing son over the phone to reporters.

“I am all cried out. I’m a wreck but I can’t sit in a ball and cry; that’s not going to bring my son home. I’m at the search site because I want to make sure they [the police] are out here. It’s giving me the peace of mind,” she said.

Read the story of how a psychic was able to lead a missing man’s friend to discover his body.

My Psychic Made Me Perform Sexual Acts To Contact My Dead Father!

Psychic Gifts: What Is Telekensis?